Tropicana Atlantic City is a 24-hour gaming destination located on the beach and Boardwalk. Featuring just under 2,400 hotel rooms and home of The Quarter, a 200,000 square foot entertainment complex, Tropicana Atlantic City is the premier resort in Atlantic City. With 24 restaurants, 25 shops, 18 bars and lounges, 2 pools, an IMAX Theatre and a spa Tropicana Atlantic City was highlighted as one of the “Coolest Casinos in the World” by PopSugar. Casino Player Magazine has voted the TROP ADVANTAGE® Club as the “Best Players Club”.  Since 2015, Tropicana completed over $90 million in renovations, including its spectacular Multimedia Light and Sound Show, the addition of AtlantiCare LifeCenter Fitness, Garces restaurants, renovations to over 900 hotel rooms, casino and more. 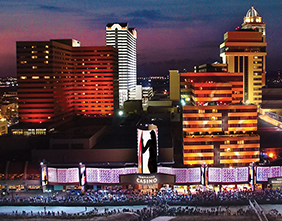